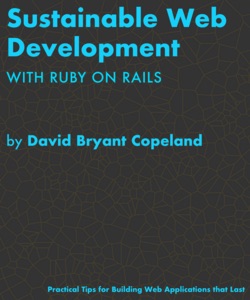 Learn how to get the most out of Ruby on Rails 7 without making a mess. Create Rails apps that can be sustained for years without accruing carrying costs that make development slow and expensive. Recently updated for Ruby on Rails version 7, this book is over 450 pages of practical tips, with clear code examples. Each tip is presented with the tradeoffs and nuances you’d face on an actual project. Everything in the book has been applied to real-world systems that have been in production for years. If you want that for your apps, this book has what you are looking for.

This work was written and produced entirely by the author. We are proud to be distributing it.

This book contains 27 chapters that cover how to sustainably grow and manage your Rails application. Almost every aspect of Rails is discussed in depth. It starts with creating a new Rails app and authoring useful development scripts for setting up and running the app that can grow with you and your team. The book then goes through many aspects of Rails, discussing how to sustainably write code and design your app. The book works outside-in starting from routes, HTML, Helpers, and CSS before continuing onto the database, Active Records and controllers.

The book also outlines a strategy for managing business logic, which is create a service layer outside your Active Records. This is all followed by a detailed end-to-end example, building a complicated feature that stresses the bounds of any Rails app. After that, the book goes through several technical topics related to managing a Rails app that aren’t about the code, such as authentication, observability, APIs, and technical leadership. This book can be your reference to growing and sustaining Rails apps for years to come!

You’ll need a working development environment to run Ruby on Rails. The book uses Ruby 3.1 and Rails 7, however you should be able to follow along and use any supported version of Ruby or Rails. You will also need to run Postgres, version 9 or later. The book contains an appendix on how to set all of this up using Docker, which is what was used to generate the code in the book. In this case, you just need Docker running on your computer.

David Bryant Copeland has been a professional programmer since 1995. He’s the author of Build Awesome Command-Line Applications in Ruby 2 and Rails, Angular, Postgres, and Bootstrap. He was most recently the Chief Software Architect at Stitch Fix, where he created many Rails apps and watched them evolve over six years and 100+ developers. He’s currently CTO of healthcare startup Mood Health.